Yip something a bit different. Working from home for last 5 months looking over my garden (I sit at the upstairs window there) I realised just how pathetically boring it was! I never really spend any time with it, just very occasionally cut the grass. So seeing this dismal effort each day inspired me to get my finger out and actually make an effort. That said I didn't quite realise just how much effort it would be or how many painkillers were needed tbh there were a few times I thought it was a very big mistake

Totally back breaking yes, worth it definitely. Took this pic a few hours ago very pleased with myself

oh and there's frogs in it already! 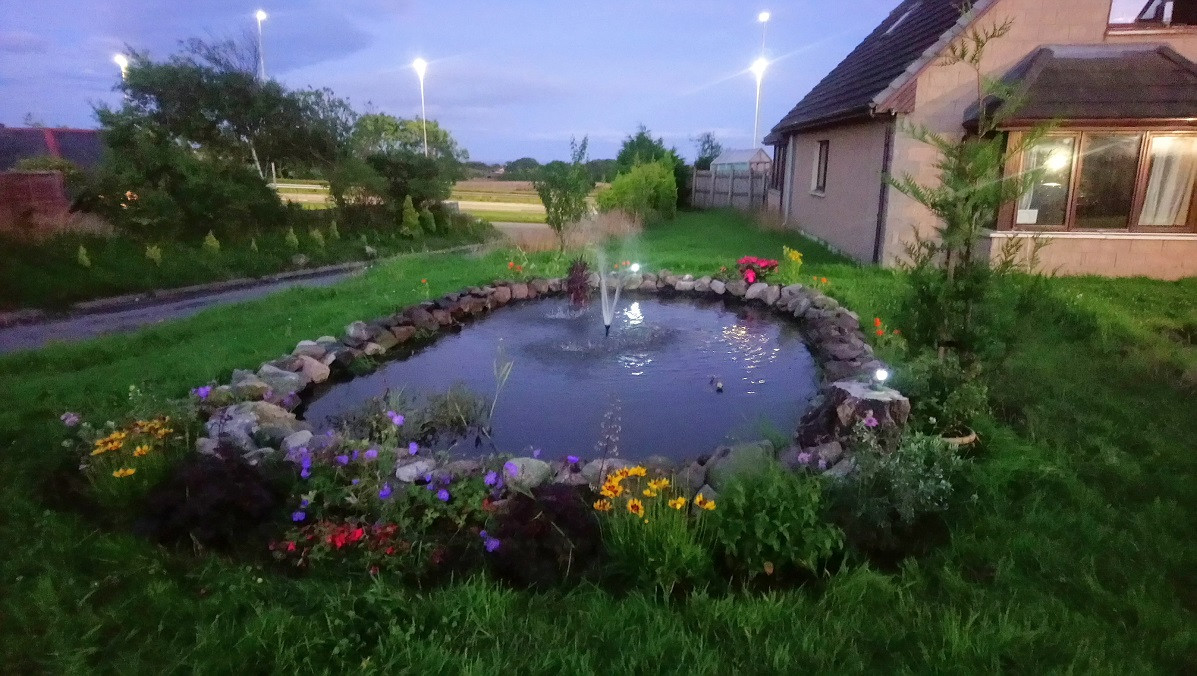 That's very nice - wanna do ours

Only kidding, that wouldn't fit in our garden

There's something soothing and relaxing about water. Nice.


Why is it that if you dig a hole 1 cubic metre, you end up with a 2 cubic metre heap of dirt ?

quote:Originally posted by 907
Why is it that if you dig a hole 1 cubic metre, you end up with a 2 cubic metre heap of dirt ?

I think it's the same rule that applies when you dismantle a donor car and it takes up twice the amount of space as the original car...

I have 2 kids, 5 and 7 years old and it's because of them I waited till now to have one. They are both good swimmers as they go to classes for that. When I first filled the pond within 5 minutes they had their swimming costumes on and were in there refusing to come out! The sides gently slope up so it's easy to walk out. The kids only gave up when I started to put the muddy plants in...

Thanks for the comments

I've just got rid of our pond! Over the years the fish either died or became heron food, until all I was let with was a fairly grotty waterfall, a pond full of green water and a pump that needed regular cleaning to get rid of the leaves that clogged it up every so often. It got a bit wiffy in the summer as well. We tried all the usual things to keep the water clear, but it was a tedious battle. Also, a couple of hedgehogs met their end in the pond, and there was nowhere to put a 'getting out' ramp for them...

After pulling up the border paving (about 30 large slabs), heaving out the pond liner (smelly!), shovelling about 3 tons of topsoil back in the hole, loading a large skip and generally knackering ourselves, we now have a large flower-bed that's waiting for planting. It's been too hot and dry to plant anything recently, but hopefully we can put in a few shrubs in in the coming weeks.

We may put a water feature in some part of that bed though!

A good portion of my back garden was concrete - I reckon the previous owners of the house must have been in the concrete business!

Anyway, it's all gone now. The garden is about 30x15 m but no access for any machinery so must have shifted 100 tons of concrete in the wheel barrow!

In the process I uncovered a WW2 air raid shelter - a proper brick built job. Was tempted to clean it out and use it but in the end I filled it in.

That looks fab mate. Properly filtered ponds are beautifully clear and a real treat. My brother has a large koi pond and it's crystal clear.

So you're now happy as a box of frogs, Mr W?